CWO and CWP: A 30+ Year Study of a Montane Snake Community 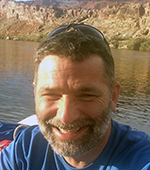 From 1990 to 2022 a team of biologists has been conducting a mark-recapture study of the Animas Mountain snake community. The Animas Mountains are a privately owned Sky Island mountain range in the bootheel of New Mexico and are not subject to some of the anthropogenic factors impacting other Sky Islands. Dr. Holycross will present a history of this study, some of the key findings to date, and discuss the future of these snakes and the project.

Andrew Thomas Holycross was born in Toledo, Ohio in 1965. An “Air Force brat”, his family moved frequently. Most of his childhood was spent in Wyoming and Nebraska. Andrew earned his Master’s degree at University of Nebraska–Omaha studying Prairie Rattlesnakes in the Sand Hills of Nebraska. He earned his Ph.D. in Zoology from Arizona State University in 2002, studying the conservation genetics and natural history of two endangered species of rattlesnakes near the international border with Mexico. In 2004 he joined the faculty at Mesa Community College (MCC) and has been teaching biology there ever since. He helped build the Red Mountain Campus of MCC in a manner that remains true to its environmental sustainability and environmental education missions. Andrew founded an outdoor club at MCC, the Adventure Association, in order to instill self-confidence and leadership skills in young people. In 2014, he was named “Professor of the Year” at MCC in recognition of his teaching and community service. He is Adjunct Curator of Herpetology in the BioCollections at Arizona State University. He has contributed over 20 peer-reviewed articles to the scientific literature, co-authored the 1st and 2nd editions of A Field Guide to the Amphibians and Reptiles in Arizona, and co-edited the book Snakes of Arizona. In addition to herpetology and teaching, Andrew’s passions include outdoor activities, including native plant landscaping, backpacking, river running, canyoneering, and rock climbing. He is 1 of 3 people who have hiked the entire length of Grand Canyon on both sides of the Colorado River. Andrew and Sonya Sass Holycross married in 2013, 35 years after they met in gym class in 1979! They have 5 children, Alessandra, Daniella, Canyon (†), Dylan, and Jenny.